A Theatre of National Importance

In 1907 the Kings Theatre opened its doors and has ever since been a magnet for theatregoers from in and around Portsmouth and Southsea.

For 110 years audiences have enjoyed musicals, plays, comedy, opera, dance, talks and film in the sumptuous surroundings of a beautiful Grade II* listed proscenium arch theatre, designated by the Theatres Trust as a ‘theatre of national architectural importance’.

J W Boughton conceived and brought to fruition the building of the theatre which was designed by the notable theatre architect Frank Matcham. The theatre stayed in the control of its original owners, The Portsmouth Theatre Limited, until 1964 when it was purchased by Commander Reggie & Mrs Joan Cooper. In 1990 it was sold to Hampshire County Council. In 2001, after a successful campaign by AKTER (Action for Kings Theatre Restoration) to keep the theatre open, the theatre was purchased by Portsmouth City Council and leased to the Kings Theatre Trust Ltd who undertook the restoration of the building, whilst the Kings Theatre Southsea Ltd operated it on a day-to-day basis.

Since 2003 it has been managed by the Kings Theatre Trust Ltd as a voluntary charitable Trust. The Trust has invested over £2.25 million in an extensive restoration programme of this Edwardian playhouse, the majority of costs being met through the Theatre’s own Box Office revenue. We continue to make history with our great programme, community projects and daily preservation of this remarkable theatre.

Boughton’s name first appeared in Portsmouth’s theatre history in 1878 when he was Manager to Lessee H C Hughes at the Theatre Royal.  Following Hughes’ death in 1882 he took over the reins of Portsmouth Theatres Company.

One of Boughton’s first decisions was to undertake a major rebuild of the Theatre Royal, re-opening it as The New Theatre Royal in 1884. To do so he engaged the most famous theatre architect of the day, C J Phipps, who had earlier built London’s Gaiety, Theatre Royal and the Haymarket. This was the Boughton style – to go for the best and to be commercially bold.

In 1891 Boughton employed the rising theatre architect Frank Matcham to rebuild and enlarge the Princes Theatre in Lake Road which had been destroyed by fire several years before. He employed Matcham yet again to remodel the New Theatre Royal in 1900, and took him into his confidence early in the new century when he began to discuss the building of a Drama and Opera House in Southsea. So confident was he that Boughton paid for the initial design out of his own pocket, only disclosing his action to his company directors in June 1906. He was reimbursed for every penny and his foresight was approved so that this new theatre – the Kings – became the third theatre owned by the Portsmouth Theatres Company.

Boughton died in 1914 but the Company continued to operate the Kings Theatre until 1964 when Commander Reggie & Mrs Joan Cooper purchased it. 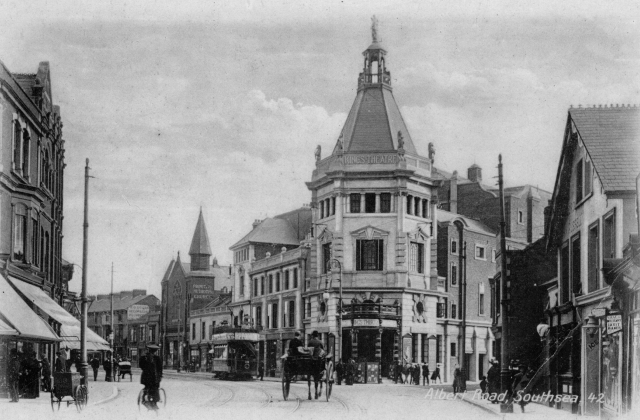 The great theatre architect Frank Matcham’s work was first seen in Portsmouth in 1891 when he was commissioned by JW Boughton to design the Princes Theatre in Lake Road, the previous building having burnt down in 1882.

By 1900 & due to the success of the New Theatre Royal in Commercial Road, Boughton felt that the auditorium & stage should be enlarged to cope with the bigger more technical shows starting to appear on tour in the provinces. He once more called in Matcham to carry out the work & the theatre was remodelled & enlarged at the rear of the site. Theatres were often remodelled in this way as it meant that the theatre would be closed for a shorter length of time that would have been possible with a completely new building, just 4 months in this case.

As far back as the 1890’s JW Boughton had a dream of establishing a theatre in the up & coming area of Southsea & to this end he bought up properties in Albert Road as they became available. By 1904 he had a sufficient plot to build a playhouse & once more employed Frank Matcham to draw up the plans. This had to be done in secret as there were a couple of rival companies who wished to build theatres in the area. The result was the magnificent Kings Theatre which opened on 30th September 1907.

Out of the 150 or so theatres designed by Frank Matcham, there are only about 25 still in existence thus making the Kings a very special place.

Portsmouth theatres Limited was formed by J W Boughton in 1898 & initially owned the New Theatre Royal in Commercial Road & The Princes Theatre in Lake Road. They also owned various properties in the town which they rented out as another source of income. The property portfolio was added to in 1907 when the Kings Theatre was built.

In 1915 the Kings & The New Theatre Royal became part of the Moss Empire touring circuit & were designated ‘No 1 touring houses’ which meant that all the top performers & shows of the period appeared at these theatres. The Princes Theatre in Lake Road was sold to local businessmen S Zeid & Joe Davidson in 1924 & it was turned into a cinema.

The Kings Theatre opened on 30 September with a production Charles the First starring H. B. Irving. He then appeared in two further plays, The Lyons Mail and The Bells, which had been made famous by his father, Sir Henry Irving.

J W Boughton died, but the Company continued to operate the Kings Theatre until 1964.

The Kings closed at the Government’s request when the war began in what became known as the "phoney war". It re-opened in 1940. Jessie Matthews was performing when the Luftwaffe made the first of its excursions across the channel, reaching Portsmouth. She swiftly returned to London.

Director Ken Russell filmed the Pinball Wizard sequence of the rock opera Tommy at the theatre, featuring The Who and Elton John on the stage.

Hampshire County Council bought the Theatre with Mrs Cooper and Mr Barnes staying on as Co-lessees.

The statue originally mounted on the top of the Tower, was found by chance in a Hampshire scrapyard. Missing for many years the original statue, renamed ‘Aurora’ is now on display in the foyer, whilst a glass-fibre replica was installed at the top of the tower.

After a successful campaign by AKTER (Action for Kings Theatre Restoration) to keep the theatre open, it was bought by Portsmouth City Council and leased to the Kings Theatre Trust Ltd who took responsibility for the building’s restoration and repair. This trust leased the building in turn to an operating company, Kings Theatre Southsea Ltd, who operated the building on a day to day basis and put on the programme of shows.
Actress Kate O’Mara became the theatre’s first patron. Her grandfather was J W Boughton.
Restoration work began under the guidance and auspices of the Kings Theatre Trust Ltd.
Actress Dillie Keane, who grew up in Southsea and was an usher at the Kings in her youth, became a patron.

After a seemingly successful 18 months the operating company, Kings Theatre Southsea Ltd, went bankrupt and the Kings Theatre Trust Ltd took over the full operation of the theatre.

The Kings Theatre won Best Restored Building by the Portsmouth Society’s Annual Design Awards and was presented with a Blue Plaque.

Actress and Strictly finalist Lisa Riley became a patron of the Kings.
The Kings Youth Theatre was launched, giving the young people of Portsmouth and Southsea opportunities to train and perform at the Kings.

The Kings Theatre welcomed two new champions as Comedian Hugh Dennis and the Lord Mayor of Portsmouth became patrons.
The Kings Theatre co-produced with the Teatro Nuovo-Verona the first-ever promenade production of Romeo and Juliet, performed in and around Juliet’s Courtyard in Verona. Further productions ran in 2016 and 2017.

Following her star turn as the Wicked Stepmother in the 2015/16 pantomime Cinderella, Actress and Singer Anita Harris became a patron.

In its 110th anniversary year the Theatre’s archives charting the history of the theatre from inception to the present day were central to an HLF/ACE funded project looking at the Theatre during the First World War; and the purchase of the third shop within the theatre’s curtilage on Albert Road meant that work could progress on its expansion plans.

Keep in touch with everything at the Kings Theatre.

Explore What’s On and look ahead to our range of shows.

As a registered charity, your support no matter the amount is invaluable.

Leave your legacy or give the gift of Theatre.